Class B Medals are awarded for acts voluntary in nature in relation to the saving of human life under dangerous conditions and at great personal risk. Recipients also receive a monetary award in the amount of $250.

On January 1, 2011, in the early morning hours, multiple units responded to the scene of a 2-Alarm fire in a multi-unit apartment building located at 920 Montgomery Street. While being met with heavy smoke and 20 foot flames, the crew of Truck 2 successfully ventilated the roof. In the course of conducting roof operations, the Officer of Truck 2, Capt. Michael Rolovich, observed two elderly people trapped in a third floor apartment, frantically waving their arms in distress as black smoke billowed out of their window. Under the coordinated direction of Capt. Rolovich and, with the help of the crews of Truck 1 and Truck 13, FFs William Mulkeen and Daniel Molloy, skillfully bridged a 24 foot ladder from the parapet of the fire building to the rooftop across the alley. With the ladder bridged at a 40 degree angle across the alley and, 30 feet above ground, both FFs climbed to adjacent rooftop. Captain Rolovich then lowered his end of the ladder down and into the window of the elderly couple’s apartment. With FF Molloy securing one end of the Ladder, FF Mulkeen made his way back across the ladder and into the elderly couple’s apartment. Upon making contact with the occupants, they became combative and fearful to make the return climb across the ladder. Understanding the critical element of time and without hesitation, FF Mulkeen removed his breathing apparatus and Turnout coat. Wrapping them in his turnout coat, he carried each across the ladder, one at a time, to safety.

On June 12, 2012, while off-duty, Lt. Frederick Putt observed smoke coming from a single-family home at 106 Leese Street. Lt. Putt immediately ran toward the house, directing a civilian to call 911. Upon entering the home, Lt. Putt encountered a woman who was unaware of the fire and instructed her to exit the building. The woman indicated that her daughter was upstairs. Lt. Putt proceeded upstairs, observing smoky conditions and located several girls. He instructed them to exit the building and he returned to the seat of the fire which began on a rear deck and penetrated the laundry room. Lt. Putt located a garden hose and applied water to the fire, keeping it from advancing further until units arrived on the scene. Let it be noted that units were responding from a distance as there was a 4-Alarm fire in another area of the City at the time this fire was reported. 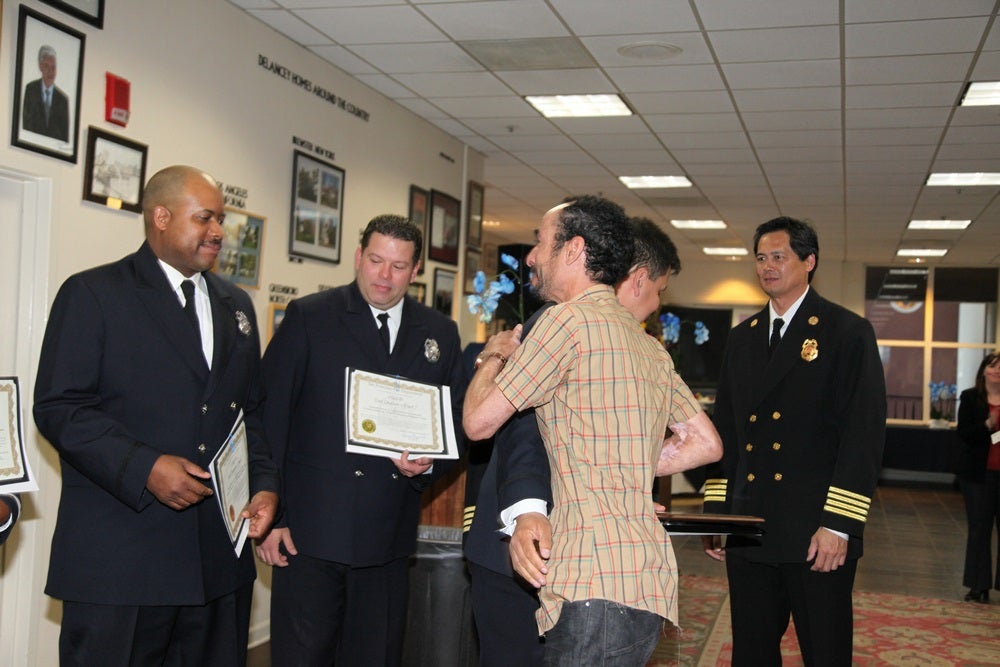 On December 1, 2011, units responded to a 3-Alarm fire at 3360 24th Street. As crews arrived they observed heavy, black smoke and a woman hanging from a third story window. The crew of Truck 7, despite encountering an iron gate and a tree obstructing their ladder placement, was able to successfully get a ladder to the woman. Simultaneously, T/Lt. Robert Coleman and a partner from Rescue Squad 2 entered the building, without the protection of a hose line and advanced to the third floor. Upon entering a smoke-filled room with no visibility, T/Lt. Coleman heard a male voice utter, “I’m here”. T/Lt. Coleman swept the room until he found the man, retrieved him and transferred him to his partner to remove from the building. T/Lt. Coleman then found the female clinging to the window from the exterior of the building with her feet. T/Lt. Coleman secured the woman and removed his facemask, placing it on her face, enabling her to breathe, while T7 was placing their ladder to the window for her rescue. During this time, T/Lt. Coleman had no choice but to inhale a large volume of hot smoke. T/ISS Jesse Bautista ascended T7’s ladder and successfully extricated the woman who had suffered severe smoke inhalation. The crew of Engine 29, while advancing the first hose line, encountered a critically injured male, removed him from the building and continued to strategically place their hose line in an area that would provide protection for trapped civilians and their rescuers. If not for the skillful execution of the crews involved none of the occupants would have survived.

On November 1, 2003, in the early morning hours, Engine 19 responded to a report of a vehicle that had driven off the Great Highway at a high rate of speed, through a fence, and into Lake Merced approximately 50 feet from the roadway. Despite frigid water temperatures, FF Giacomini and FF/PM Faciani searched the murky waters of Lake Merced for the reported vehicle. Upon locating the vehicle, they discovered one passenger sitting on top of the undercarriage of the inverted vehicle in obvious shock, having sustained life threatening injuries. With information from that victim and from another witness they determined that a second passenger, a pregnant woman, could still be trapped inside. After forcing entry through the driver side window and, after several sweeping attempts of the interior of the submerged vehicle, they felt an arm. Not knowing if the woman was deceased the two went back into the vehicle and removed her. Upon bringing the woman to the surface, she opened her eyes and took a breath. She was safely brought to shore and survived, as did the driver. Both were released from the hospital shortly thereafter.