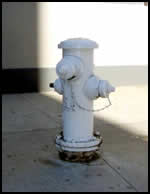 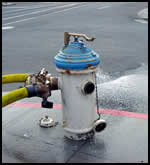 The Auxiliary Water Supply System, more commonly known as the San Francisco Fire Department High Pressure System, is a system of mains and 1889 High Pressure Fire Hydrants, independent of the domestic water supply, built solely for the purpose of firefighting. The system is supplied with fresh water, by gravity, from a reservoir and two tanks located at high elevation in the city.

In the event the gravitational fresh water supply should fail, two pumping stations, located on the Bay Shore can, at a moment's notice, begin pumping salt water into the high pressure system. There are 5 manifolds along the bay to allow the fireboats to augment the system with bay water.

Anticipating the possibility of the high pressure pipelines being ruptured by earthquake, as happened to the mains of the Spring Valley Water Company in 1906, the entire distributing system was divided into three zones. The system incorporates the use of Gate Valves, placed at frequent intervals throughout the zones, by which a damaged section of the pipeline may be isolated and shut off separately, leaving the remainder of the system in operation.

The Auxiliary High Pressure Water Supply System is serviced and maintained by the San Francisco Bureau of Engineering and Water Supply.

The San Francisco Fire Department is provided with a system of underground cisterns having a total storage capacity of approximately 11 million gallons of water from which to draft. This cistern system consists of 172 cisterns strategically located throughout the city in the event of major damage to the distribution system of the Water Department and to the Fire Department High Pressure Supply System.

Fire Department cisterns have no connection to either the Water Department or high pressure supply system. They are under continual inspection by the Fire Department and are kept full by the Bureau of Engineering and Water Supply.

In addition to SFFD cisterns, practically all private and public water storage is available to the Fire Department for emergency use.

Watch a video about the Cisterns in San Francisco:

"The Science of Firefighting: Cisterns"